There’s no room for thin skin in successful marketing

Last week, we got a copy of a readership survey related to a trade ad we ran for a client.  In the survey, the ad was among the top-ranked when it came to the most seen, most remembered and most read.  But what was absolutely fascinating was how widely the readers’ reactions varied when asked their impressions of the ad. Their verbatim responses ranged from “Tacky” to “Perfect 10/10.”  One reader commented “Poor taste, undignified, a true turn-off.”  Another reader said “I clipped it out and it is on my refrigerator now. The whole idea of standing out in a crowd is extremely important to me if your business wants to be noticed.”  Several said they were “shocked at first” but then got the message and completely agreed with the point. 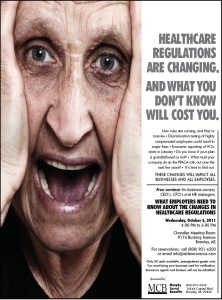 In fact, I’ll say nearly 25% generally disapproved of the ad and maybe another 5% very strongly disliked it.  On the other hand, the number of respondents who liked the ad and got its message was exceedingly high. And the turnout was successful.

What’s my point?  Well I have three points to be precise.

The first is, we begin by acknowledging that we’re not right for everybody.  In fact, we believe that as a marketing agency, we’re probably right for just a few percent of business operators, those who are strongly marketing-oriented and know that traditional advertising doesn’t get the attention of a disinterested public. The ad, therefore, is self-qualifying and will provoke a certain number of negative responses. That’s just fine, since again, we’re not right for everybody.  Neither should you try to be all things to all people.  Those that attempt such alchemy are doomed to blend in with all their competitors.  Be different and proud of it.  Not everybody is a Mac user.  Not everybody likes Starbucks coffee. These hugely successful companies know who their market is and they don’t try to please everybody.

My second point is, it’s so damned tempting to knee-jerk to negative responses.  One of my favorite quotes is “Everybody likes it until somebody doesn’t,” meaning the one or two negative voices often seem to drown out all the positive voices.  It’s human nature to want universal approval.  But it’s smart marketing to realize that no matter how hard you try, there will always – ALWAYS – be dissenters and not to let that veer you off course. (Just because someone doesn’t like it doesn’t mean they’re right or speak for the majority.) I’ve had clients who chose to kill a good campaign because they got a couple of negative calls and missed the tidal wave of silent support.  People seldom call in to express their acclaim about an ad they like; they voice it at the sales counter.  The trick is to start by knowing who you are and who you’re most right for (going back to my previous point), and reconcile that against the overall trend in audience feedback.

My third point is that when you commit to being really visible, you are choosing to declare your difference and necessarily you are stepping out on a limb. Strong, memorable, provocative advertising is risky stuff, not for the meek or conservative.  One has to be willing to suffer a few arrows.  Even to fall off that limb once in a while.  But in a society that’s over-saturated with commercial messages, you have to stand apart to be noticed – that is unless your budget allows brute force bombardment.  We don’t have that kind of money.  Do you?

We’re very happy to have clients who like our unique direction, and must be satisfied that most of the industry is more conservative in approach than we are.  Hey, Jaguar has to live with the fact that more people choose Hondas.

The fact that you’re reading our blogs, and have read this far in today’s post demonstrates that you’re within the segment who has the opportunity and vision to succeed against your more conservative competitors.

You just can’t do it with thin skin.